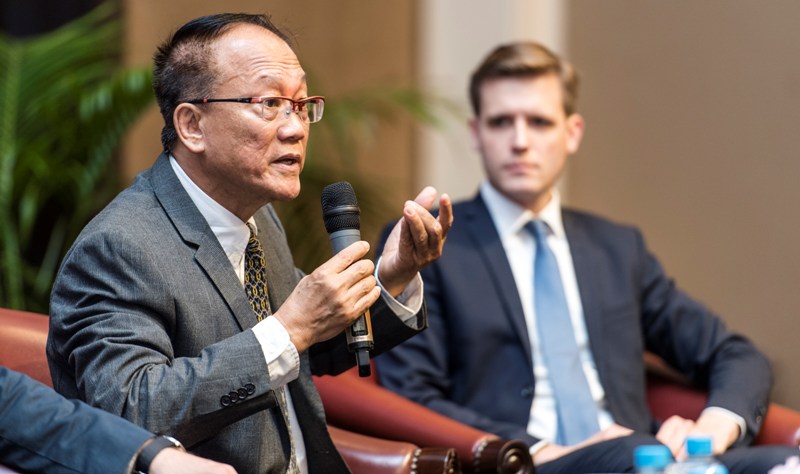 Manufacturing is in the middle of a rapid digital transformation that considerably affects the apparel industry worldwide. On the 19th of June, the German Business Group in Cambodia (ADW) co-hosted its Digital Future Talk, a conference on Industry 4.0 with a special focus on the global textile and garment industries. More than 140 participants from local and international business, government, the donor community, academia and civil society attended the event. Although still at an early stage, the 4th industrial revolution is already shaping numerous economies around the globe. Due to the rise of mobile internet, artificial intelligence and sensor technology as the world’s physical and virtual systems become interlinked and allow global interactions in a much more flexible way.

At the same time, digitalization is fundamentally disrupting existing business models and reshuffling international supply chains, like the garment sector. Furthermore, a third of German purchasing managers in the garment and shoe retail declared that they are aiming at bringing production back home, to on-shore manufacturing back from low-cost manufacturing bases, as soon as technically possible and financially viable. Companies and countries need to adapt to this rapid change, if they are not to be left behind. But how can Cambodia prepare and position itself for this revolution in manufacturing and the way business is managed? What are the challenges for industry lying ahead? How can high levels of employment be maintained while moving away from labour-intensive production? These were the key questions of the conference, introduced by ADW president Tassilo Brinzer in his opening remarks.

Dr. Philipp Meyer, board member of Trumpf Germany, stated that his company has become a global leader in Industry 4.0 solutions and a key player in the automation of the garment industry of tomorrow. Digitalization significantly accelerates production processes and – because of the demand for new technologies – creates many new jobs that have never existed before. He underlined, that an important prerequisite for successful management of the Fourth Industrial Revolution is to make digitization a priority on the political agenda. Key stakeholders of the country’s economy should develop a joint strategy for transforming the economy. Main concerns of the audience referred to massive job losses. Workers who do not have sufficient skills and knowledge may be left behind.

John Cha, Executive Committee Member of the Garment Manufacturers Association in Cambodia (GMAC), emphasised the tremendous economic and social impacts that the garment sector is having in Cambodia. Cambodia’s Garment industry and its growth have in the past ten years been incredibly resilient and allegedly built a reputation for some of the highest labor standards in the industry worldwide. It is paying some of the highest wages within its developing-nation peers, salaries have tripled in the last five years to $182 per month, he said. The industry is a huge provider of work and income for about half a million workers-employees about 85% are females from the rural areas.

The industry provides about $2 billion in wages per year. About 2 million people are estimated to depend indirectly on the sector. It contributes to about 18% of the country GDP and enabled the establishment of the National Social Security Fund (NSSF). Main challenges are that wages raise faster than the productivity growth rate, that workforce skills are limited, that local supplies of raw materials and support industries are lacking, and the sector structure has not changed much – based on cut-make-trim and with little investment in technologies. Main chances refer to the relocations of factories/orders from China due to the trade disputes between China and the USA and increased regional integration within the ASEAN region.

In their journey to adopt Industry 4.0, each country is expected to encounter many challenges related to the skill level of their work force, Martin Klose, Delegate of German Industry and Commerce in Myanmar, said. The skills which are important today will cease to be so in the future and the work force will be expected to possess new skills in the domain of information technology, data analytics, etc. He said, that although Germany has undertaken independent initiatives to promote vocational education and skill development, there are still significant efforts required for focusing on skill development for Industry 4.0. Initiatives like curricula development and training the trainers, hosting skill competitions, or jointly developing skill training are needed.

The Cambodian garment sector must adapt and transform, “otherwise the garment industry caravan will move on”, the conference speakers warned unanimously. Cambodia should realize the opportunities offered by digitalization to prepare for the future.