HomeNewsGermany consolidates its position as one of the most competitive economies

Germany consolidates its position as one of the most competitive economies 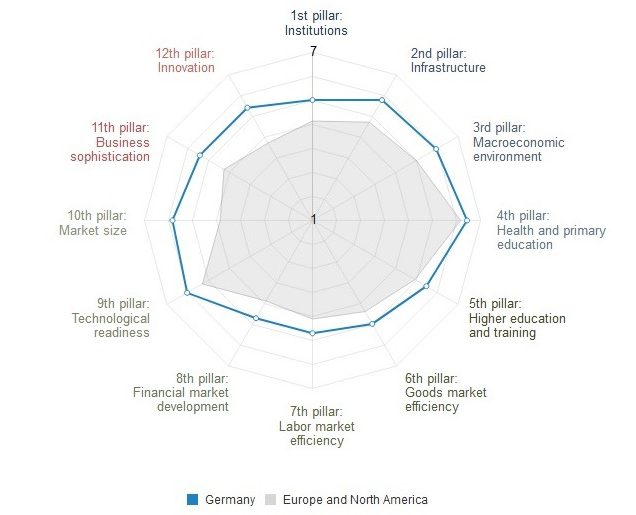 In the Global Competitiveness Report 2017-2018, Germany ranks fifth among 137 states worldwide, the Swiss-based World Economic Forum announced on September 27th. Annually published since 2004, the report integrates the macroeconomic and the micro/business aspects of competitiveness into a single index.

Despite a slight increase in the overall score to 5.7 (plus 0.1), Germany’s position remains unchanged compared to last year’s ranking. According to the data, Germany performs better in each of twelve categories than the average of all European and North American states. Its main assets are innovation, business sophistication, technological readiness, and infrastructure in which the country belongs to the top ten in the world. “Global competitiveness will be more and more defined by the innovative capacity of a country”, said Klaus Schwab, founder and CEO of World Economic Forum. Consequently, Germany seems to be in an excellent position to cope with future challenges, mainly relating to the fourth industrial revolution (Industry 4.0).

The Global Competitiveness Report presents a framework and a corresponding set of indicators in three principal categories and twelve policy domains (called pillars) for 137 economies. In the current volume, Cambodia ranks 94, deteriorating by 5 positions. For further information, please visit http://reports.weforum.org/global-competitiveness-index-2017-2018/competitiveness-rankings/.