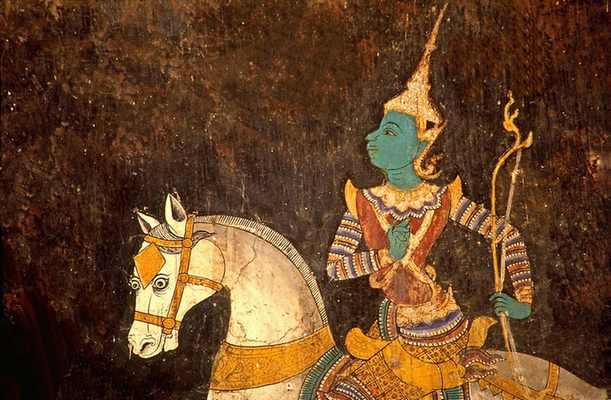 In 1996, German scientist-turned-photographer Arjay Stevens started both a documentary and photographic-artistic project on the Reamker, the famous Cambodian epic poem, based on the Sanskrit’s Ramayana epic. This year, he published a 466-page photography book of mural paintings, temple carvings, shadow-puppet-play and traditional masked dance. The unique collection of photos and scripts retells the story of divinity and adventure by capturing the elements of this Indian-derived art form. Its 66-page-appendix, containing the original Khmer inscriptions of the murals of the Royal Palace’s silver pagoda, maybe presented for the first time in German, English and French translations. By doing so, Mr. Stevens contributes not only to a deeper understanding of the Khmer culture and mentality, but also delivers a milestone for German-Cambodian cultural relations.

What are the mythic roots of the Reamker and how has it shaped the Khmer culture?

The ancient Indian tail of devotion, separation and reunion and the battle of good against the evil are almost as old as civilization itself. Scholars believe the poem was composed in a verse form by the poet Valmiki. But it grew to its proportions over the centuries. When it spread out around two millenniums ago into most parts of Asia it also was transformed into the old Khmer culture. This rich source of inspiration for religion and arts created literature, narratives, artifacts and performances in an overwhelming variety. It became heart and soul of the Khmer society.

Have the interpretations of the Reamker altered during centuries and what does it mean today, especially for young people who seem to be more exposed by exogenous cultural influences than their parents and grandparents?

As in all countries where the timeless tale was adopted, also in Cambodia the Hindu epic was recomposed. The Reamker became Hindu-Buddhist a rare example of syncretism, meaning that Rama became a portrait as a Bodhisatva, a moral character with supreme power, energy, talent, intelligence, determination, love of justice and equanimity as a Buddha who refrains from entering nirvana in order to save others and is worshipped as a deity in Mahayana Buddhism. Over time the Khmer Reamker has incorporated also Khmer local folklore. Some very popular parts of the Reamker were added, e.g. the relationship of Hanuman and Sovann Machha, the golden mermaid. Today this episode is probably the most painted one by young artists at the Royal University of Fine Arts which is part of this book as well. As I found young people love Reamker very much, but have a lack of knowledge.

It took you 22 years to finalize your book. What were the main challenges to finish it?

There were many of it. First the field work: finding the locations with artifacts in the countryside and completing the performances during the time whenever they were available. Some performances where extra arranged for me. A big challenge is always to select the photographs, but out of hundreds of thousands was most difficult. Not to talk about the editing.  And then doing research – sometimes it was hard to classify my findings or getting some characters identified. Furthermore, again translations were a problem especially with the Khmer language. And it was important for me to print the book in Cambodia to support the country, even it is a special challenge by itself.

After the publication of your book, what kind of reactions have you received so far, e.g. from government officials, cultural organizations and the scientific community?

The reactions were overwhelmingly positive and encouraging. When Prince Sisovath Tesso saw it first he was so surprised and Madam Minister of Culture said “it is a sensational book” and bought it to use it as official state present. American scientist Dr. Trent Walker loved it from the first to the last page. The book presentation at the Buddhist Institute was highly positive accepted. An official from the Indian Embassy suggested using this book to study differences to the Indian original. And, together with other high ranking participants, a Professor from the Royal Academy of Cambodia praised the book very much. He even encouraged me to cooperate with them on the matter. The publisher of the GLOBE media, as well as Monument Books said it’s the best book on Cambodia since at least two decades. VOA Khmer reported twice about it. Other reviews, following several interviews, are in the pipeline.